Networking simulators and emulators are particularly useful because they allows testing new networking protocols and algorithms or changes to existing ones in a controlled and reproducible environment. Moreover, compared to the cost and time involved in setting up an entire test bed containing multiple networked computers, routers and data links, network simulators are relatively fast and inexpensive. 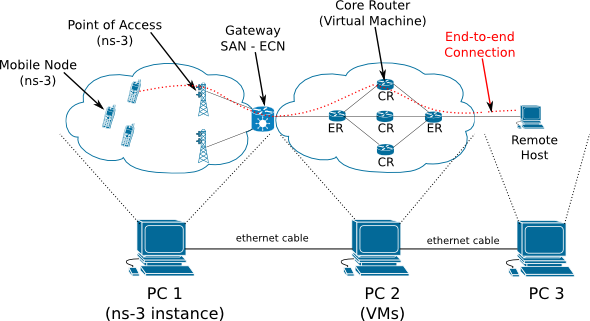 The reference scenario is represented in Figure 2: it is composed of two heterogeneous wireless access networks: LTE (green) and Wi-Fi (red). These two networks are connected to a Core Network. Two Edge Routers (ERs) are located at the frontiers of this domain: one communicates with LTE and Wi-Fi networks and the other is connected to a remote host. Three different terminals are included in this scenario: i) Wi-Fi terminals, called Station (STA) nodes; ii) LTE terminals, called User Equipments (UEs); iii) multimodal terminals, each of them equipped with both network interfaces. Each multimodal terminal is able to execute vertical handover while is transmitting a file of arbitrary type and dimension, using TCP or UDP.

Network Simulator 3 (NS3) is an open source discrete-event network simulator. This software implements protocols, algorithms, traffic flow applications and all other functionalities necessary to fully simulate the behaviour of a network. Unfortunately, NS3 does not officially implement the Delay Tolerant Networking (DTN) paradigm, which can be useful to simulate all types of networks whose links suffer from high delays or disruptions (expected or not), such as Wireless Sensor Networks and Satellite Networks.
Our need was to have a tool which allows us to simulate a Nanosatellite-DTN network.
We have developed a module which includes:

Mininet is a free and open-source software for network emulation which allows to create a network composed by virtual hosts, switches, controllers and links running on a single Linux machine. Mininet uses lightweight virtualization in order to make a single system act like a complete network. Mininet is the most used emulator for SDN testing as it can provide a fully compliant SDN topology consisting of multiple instances of Open vSwitches, which support OpenFlow protocol and can therefore interact with a dedicated SDN controller.

A powerful software controller is Beacon, which is a Java-based SDN controller fully supporting OpenFlow protocol. Beacon architecture is based on OSGi Framework, consisting of several bundles with specific functionalities interacting together by means of the Spring Framework. 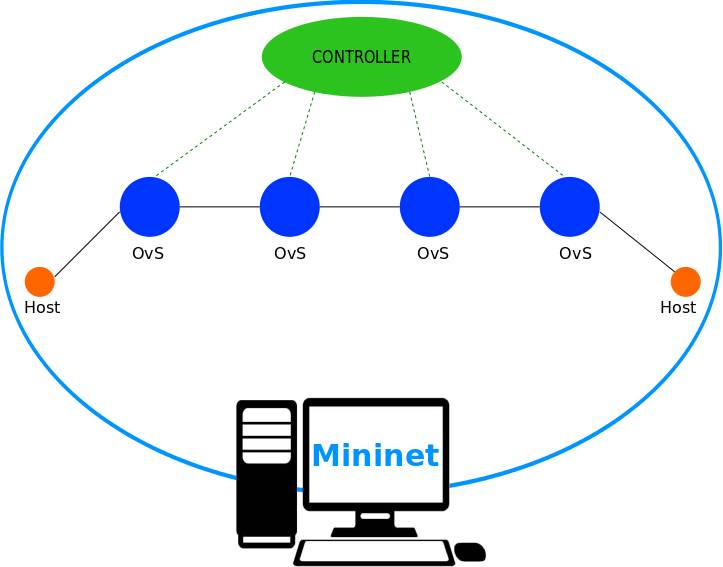 We are developing custom bundles dedicated to collect flow, queue, and port statistics from network switches, compute performance parameters and decide queueing strategy upon specific metrics. The chosen strategy is then implemented by installing ad hoc rules inside the switches by means of Flow Modification commands.

The aim of these modules is to support Quality of Service using basic tools offered by OpenFlow protocol. When the offered load to a switch grows too much, our modules are able to detect the critical condition and take decisions accordingly in order to avoid packet loss. The queueing strategy allows therefore to avoid upcoming congestion based on the computed metrics.

Mininet is a free and open-source software for network emulation which allows to create a network composed by virtual hosts, switches, controllers and links running on a single Linux machine. Mininet uses lightweight virtualization in order to make a single system act like a complete network. Mininet is the most used emulator for SDN testing as it can provide a fully compliant SDN topology consisting of multiple instances of Open vSwitches, which support OpenFlow protocol and can therefore interact with a dedicated SDN controller.

Ryu is a component-based software defined networking framework. Ryu provides software components with well defined API that make it easy for developers to create new network management and control applications. Ryu supports various protocols for managing network devices, such as OpenFlow, Netconf, OF-config, etc. About OpenFlow, Ryu supports fully 1.0, 1.2, 1.3, 1.4, 1.5 and Nicira Extensions. All of the code is freely available under the Apache 2.0 license.

We are developing custom application dedicated to collect flow statistics from network switches, compute some features and decide if the considered flow is affected by malware or not. 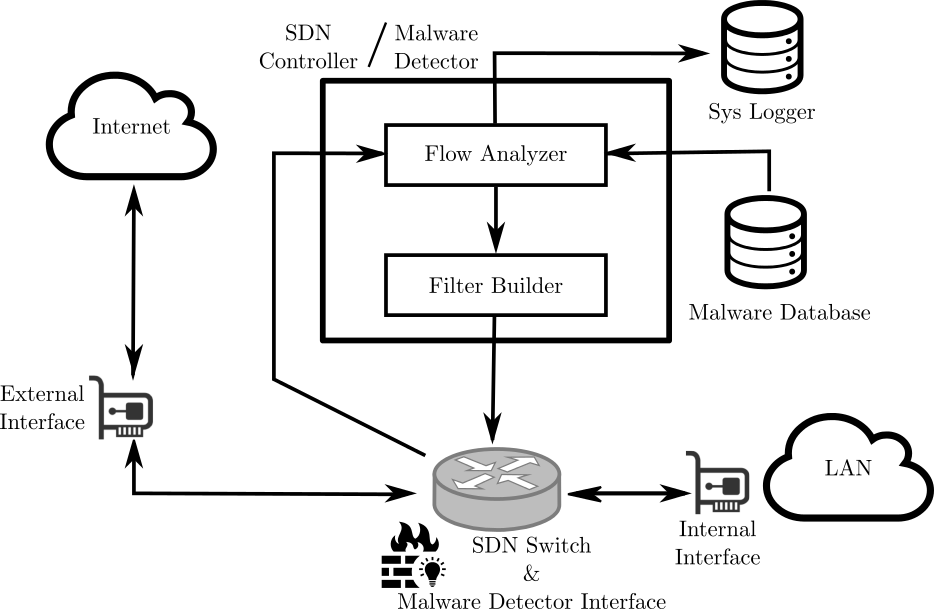 The aim of these modules is to support malware detection using basic tools offered by OpenFlow protocol.

The aim of the ACE system is to emulate a network environment composed by a set of earth stations that communicate through a satellite platform. Every station may act as router and consequently may interconnect different networks.
Furthermore, in order to achieve the data communication through the satellite network, a satellite modem is included within each station. In more the modem may be an independent hardware entity connected to other units by means of a cable or also a network adapter card plugged into a unit (e.g. the router itself or a PC). In practice, it can be though as a data link layer of an overall protocol stack.

It is possible to identify, in a real satellite system, the following main parts:

The reference architecture of the emulator is shown in Fig. 1, along with one possible system to be emulated enclosed in the cloud (a GEO satellite system has been depicted in this case). Different units called Gateways (GTW) operate as interface among the emulator and the external PCs.
Each GTW is composed of a PC with two network interfaces: one towards the external world (a 10/100 Mbit/s Ethernet card), the other towards the emulator. An Elaboration Unit (EU), which has a powerful elaboration capacity, carries out most of the emulation, as the decision about the "destiny" of each PDU.
The interface towards the external world concerns the GTWs; the loss, delay and any statistics of each PDU regards the EU; the real transport of the information PDU through the network concerns the input GTW and the output GTW.

The various components are connected via a 100 Mbits/s network, completely isolated, by a full-duplex switch. In such way, the emulator has an available bandwidth much wider than the real system to be emulated, which should not overcome a maximum overall bandwidth of 10/20 Mbits/s.

In more detail, Fig. 2 shows how the different parts of the real system (modem, data link protocol, channel and switching system, as mentioned in the previous sub-section) are mapped onto the different components of the emulator.
It is clear in Fig. 2 that, the architecture of the emulator is not exactly correspondent to the real system. The earth station, identified by the grey rectangle, is divided, in the emulator, into two parts (GTW and EU). The network layer, the network interface towards the external world and the interface between the network layer and the satellite modem are contained in the Gateway (GTW).
The other parts of the modem (i.e. the data link layer, protocol and encapsulation), the overall transmission characteristics (e.g. bit error ratio, channel fading, lost and delayed packets), the on-board switching architecture as well as the queuing strategies are contained in the Elaboration Unit (EU).